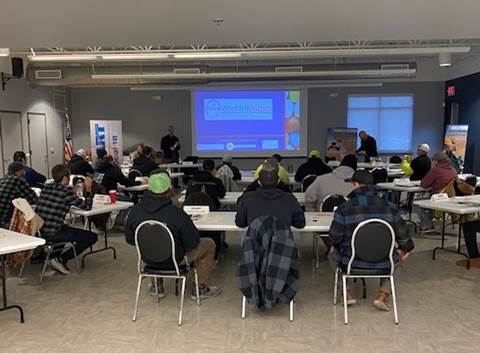 At Sheet Metal Workers Local 18 in Waukesha, Wisconsin, the past few years have provided organizers with insight into what members go through in terms of mental health struggles, substance abuse or family pressures. Director of Organizing Hallie Jennerman and Statewide Organizer Craig Holzem have taken that knowledge and made some changes to how apprentices are prepared for their careers.

By incorporating lessons on suicide prevention from Construction Working Minds into a mandatory Construction Organizing Members Education Training (COMET) class for second- or third-year apprentices, Local 18 leadership hopes to change the culture from the ground up, one student at a time.

The idea began to form during the initial COVID-19 shutdown in the spring of 2020. Joseph Sellers, general president of the International Association of Sheet Metal, Air, Rail and Transportation (SMART) workers, had suggested that local union leadership use the time to get in touch with members. At Local 18, Holzem spearheaded that project by creating a call list, and the staff of 12 mobilized and began to place wellness calls to each of the roughly 4,500 members. Over the next six weeks they were able to get through the bulk of the list, and the things they heard from members opened their eyes to the mental health struggles many were facing during that crisis. Holzem gave out the number to the Helpline provided by the Sheet Metal Occupational Health Institute Trust (SMOHIT) to a few individuals and saw what a difference immediate, person-to-person help could make, he said.

Holzen and Jennerman agreed they were surprised at the number of people struggling but also gratified to see how much of a difference reaching out made to members.

“It was extremely helpful,” Holzem said. “We got fantastic feedback from that.”

“We were pretty much overwhelmed,” Jennerman added. “There’s a lot more people struggling than we thought. And we want to get this information to people while they’re young, so it’s another tool in their box.”

Prior to implementing the Construction Working Minds material and discussions as part of the COMET class, Local 18 had more of a reactive approach rather than a proactive effort. In addition to SMOHIT, there is an Employee Assistance Program (EAP) through their health and welfare benefits.

“For the most part everything’s been on an individual basis,” Holzem said. “Should an event occur, then you’re dealing with the member after the fact.”

In order to hopefully get ahead of the curve, Jennerman and Holzem took the Construction Working Minds model and built upon it to suit their local’s individual needs and experiences. Many members had served in the military, so they were aware of post-traumatic stress disorder (PTSD), substance abuse, depression and other issues that occur with higher rates among veterans.

By Jan. 1, they had put materials together and had everything staged to roll out.

“It’s going to be a progressive thing, where different discussions lead to different avenues to potentially talk about,” Holzem explained.

About a quarter of the eight-hour COMET class, or roughly two hours, is now devoted to discussion about mental health issues and suicide prevention. Since apprentices typically take COMET training in their second or third year, this introduces them to the topic as a natural part of work life and helps remove the stigma otherwise associated with reaching out for help. This year, about 240 students have gone through the training, which takes place in January.

Jennerman and Holzem agreed that apprentices were a natural fit because most of them are from a younger generation and view it as more acceptable to have these conversations. Changing the culture will start with the apprentices, but they said they hope it won’t end there.

“With older males, it’s not a common conversation, so we want it to be OK to talk about it,” Jennerman said.

The materials and class are offered to any members who would like to participate, not just apprentices, and organizers get the word out on Local 18’s website and social media.

During the class, they’ve had members come forward about struggles with substance abuse as well as share personal stories about losing loved ones to suicide. Jennerman noted one side effect of implementing this suicide prevention program into the training is an improved sense of solidarity. Because it’s an issue almost everyone is touched by in some way, discussing it in a group setting brings everyone together. The priority is to help the person affected, but those who listen and help also benefit, strengthening ties between union members.

When a member expresses a need for help, the first question is always whether that member prefers to speak to a peer or a stranger. Jennerman said SMOHIT and the Helpline is their first go-to if a member says they’d rather discuss it with someone they don’t know. Licensed counselor Jeremy Holburn manages the Helpline 24/7 for any member going through a crisis.

For locals thinking about how to allocate time and space to normalize discussion of mental health challenges and suicide prevention, Jennerman and Holzem have nothing but praise for the Construction Working Minds curriculum and their choice to integrate the materials into the COMET class.

“Our entire staff is 100% behind this program,” Jennerman said. “We highly recommend it to all the locals.”

Previous Post
Helpline for unionized sheet metal workers marks fifth year, growth
Next Post
You don’t have to fix it — you just have to be there